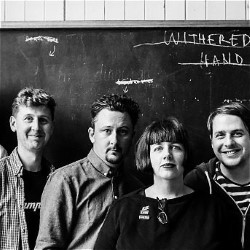 Withered Hand is Edinburgh based singer-songwriter Dan Willson, who started writing songs and singing in his thirties following the birth of his first child and the death of a close friend. Alongside activity with his band, Dan is a well-travelled musician with a cult following since the release of his debut, Good News, in 2009. The release of a strident second album, New Gods, in 2014 propelled Withered Hand into the charts, featuring appearances by friends, luminaries and supporters from the Scottish music scene, from Belle and Sebastian to Frightened Rabbit to The Vaselines and beyond.