Back to events
political, international - EdFringe 2022 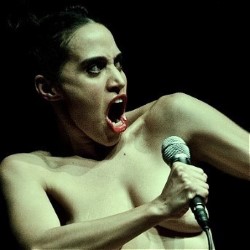 **** (Guardian, Times). Winner of six major theatre awards at the Fringe including Scotsman Fringe First and The Stage Best Actress Award. La Merda's poetic and shocking stream of consciousness on the human condition has thrilled sell-out audiences around the world, from Europe to Brazil and Australia to North America. To celebrate its 10th anniversary, Cristian Ceresoli’s acclaimed original production returns for 12 special shows in the same intimate space where this international theatre phenomenon began, with Silvia Gallerano reprising her award-winning unmissable performance. 'One of the most wonderful full on performances ever seen in Edinburgh' **** (Scotsman).