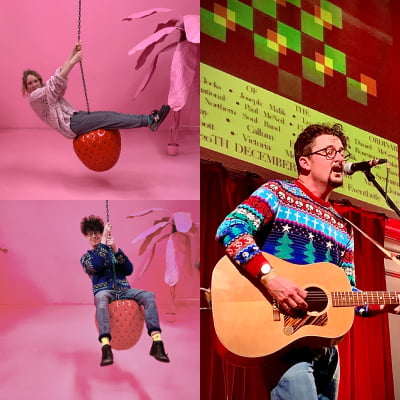 Kae Tempest grew up in South-East London, where they still live. Kae’s work includes Balance, their first album with their band Sound of Rum; Everything Speaks in its Own Way, a collection of poems on their own Zingaro imprint; GlassHouse, a play for Cardboard Citizens; and the Paines Plough commissioned plays Wasted (published by Methuen) and Hopelessly Devoted (published by Methuen).

Hollie McNish is a poet based between Glasgow and Cambridge. She won the Ted Hughes Award for New Work in Poetry for her poetic parenting memoir – Nobody Told Me - of which The Scotsman stated ‘The World Needs this Book’. She has published three further collections of poetry – Papers, Cherry Pie, Plum – a play relating the history of UK women’s football – Offside – and her latest poetic memoir – Slug...and other things I’ve been Told To Hate – is a Sunday Times Bestseller. She has just completed a re-imagining of Sophocles’ Greek Tragedy Antigone. She loves writing. She puts her decorations up on December 1st.

Over the past few years Withered Hand – aka Edinburgh DIY folk-rock troubadour Dan Willson – has released two outstanding albums, seen several of his songs picked up on MTV and cult series ‘Skins’, and gained an unlikely legion of fans including Jarvis Cocker and Rolling Stone Magazine USA (who decreed him “Artist to Watch”). He has come to believe that Father Christmas is in everybody.

Michael Pedersen has performed aw over the globe and counts among his fans Irvine Welsh, Charlotte Church, Stephen Fry & his mum. Michael won the Robert Louis Stevenson Fellowship and The John Mather’s Trust Rising Star Award. His last poetry collection Oyster was a collaboration with Scott Hutchison, and his debut prose book Boy Friends comes out with Faber & Faber in 2022. Michael has 15 Christmas Jumpers: responsibly sourced and worn shamelessly from mid October.